Angels From The Realms Of Glory. 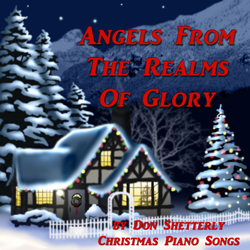 Anything with angels in it has to be part of Christmas and this Christmas Carol is no exception.

A majestic song, Angels From The Realms Of Glory, speaking about the Christmas story.

It has a lively upbeat tempo that is played with power and reverence.

Track #2 of 15 songs on Christmas Piano.

James Montgomery wrote this Christmas carol and first printed it in 1816.  It was included in one of the first hymnbooks used by the Church of England and so it became prevalent in that day. James Montgomery was a well-known poet in his time who began writing poetry at the age of 10.

Even though James Montgomery flunked out of school at age 14, he found a job at a local radical newspaper. Later, he would become the editor of the paper and change its name. Angels From The Realms of Glory was first published in his newspaper.

While there are mainly four stanzas that are sung today, the original had a fifth stanza that was somewhat harsh. Usually omitted these days, the song had a logical progression where stanza one is about the angel’s song.  Stanza two is the shepherd’s adoration, and stanza three is the sages’ gifts.  The fourth stanza four is saints’ praise, and the fifth stanza which is generally omitted is about the sinners’ repentance.

Personally, I can see why that fifth stanza has been dropped because it is a downer taking away from this magnificent and majestic song.

Lyrics To Angels From The Realms Of Glory

Angels from the realms of glory, Wing your flight o’re all the earth
Ye who sang creation’s story, Now proclaim Messiah’s birth:

Shepherds, in the fields abiding, Watching o’re your flocks by night,
God with man is now residing, Yonder shines the infant light;

Saints before the altar bending, Watching long in hope and fear,
Suddenly the Lord, descending, In his temple shall appear: