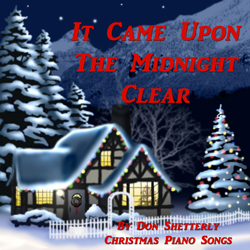 For some reason, every time I play this song, I feel like I am swaying to the music.  It just has that feeling to it.

It Came Upon The Midnight Clear is one of my all-time favorite Christmas songs.

I can feel the peacefulness and stillness showing through in this classic song.

It is a song that gives hope even for what everyone has toiled through and dealt with in their life.

Track #7 of 15 songs on Christmas Piano.

Written by a Unitarian minister from Boston, Edmund Sears.  In 1849, he wrote it as a poem and Richard Willis wrote the music for this hymn.  The message of the song was peace on earth, good will towards men.

Because of the civil war at the time, Edmund Sears wrote something that tried to shed the light on his concerns about the social situation in the United States.

There is an original stanza that is missing, but went as follows:

But with the woes of sin and strife, the world has suffered long
Beneath the angel-strain have rolled, Two thousand years of wrong;
And man, at war with man, hears not the love-song, which they bring:
O hush the noise, ye men of strife, and hear the angels sing!

Edmund Sears was co-editor of the Monthly Religious Magazine where most of his hymns were first published.  He also had a lesser known hymn, Calm On The Listening Ear Of Night.

Lyrics To It Came Upon The Midnight Clear

It came upon the midnight clear, that glorious song of old,
From angels bending near the earth, to touch their harps of gold;
Peace on earth, goodwill to men, from heaven’s all gracious King;
The World in solemn stillness lay, to hear the angels sing.

Still through the cloven skies they come, with peaceful wings unfurled;
And still their heavenly music floats, O’er all the weary world:
Above its sad and lowly plains, They bend on heavenly wing;
And ever o’re its Babel sounds, The blessed angels sing.

And ye, beneath life’s crushing load, whose forms are bending low,
Who toil along the climbing way, with painful steps and slow,
Look now, for glad and golden hours, come swiftly on the wing;
O rest beside the weary road, and hear the angels sing!

For lo! the days are hastening on, by prophet bards foretold,
When with the ever circling years, comes round the age of gold;
When peace shall over all the earth, its ancient splendors fling,
And the whole world give back the song, which now the angels sing.